The shop is open Tuesday - Thursday 10am - 5pm Friday - Saturday 10am - 2pm Please bring a MASK. We post orders out Monday to Fridays (T&C's see faq)

You have no items in your shopping basket.

24 Half Pans, 2 Brushes and a porcelain Palette in Walnut wooden box.

If you're looking for some of the world's best paints you can't go far wrong with the Sennelier artist quality paints. Sennelier have been manufacturing paints since 1887 and their paints have been used on paintings in some of the world's greatest museums. By keeping the traditions of the old masters and combining them with new and innovative modern chemistry the quality of these paints make them a 'must have'.
The Sennelier artist level watercolours are honey based, which is not only used as a preservative but is an additive that gives incredible brilliance and smoothness to the paint. Sennelier strives for excellence and has reworked it's watercolour formula to increase the amount of honey in the paint to reinforce the longevity, radiance and luminosity of the colours.

Sheet in box to make your own chart.

The roots of Sennelier watercolours are to be found in the Impressionist school. At that time, painters drew their inspiration from nature and set out to reproduce natural light. Watercolour technique offered spontaneity, lightness of touch, fluidity and transparency allowing a quick translation of a particular light, vibration or shape. Paul Cézanne, for instance, produced forty or so watercolours of the Mont Sainte Victoire in Provence. Earlier, in England and on the Normandy coast of France, William Turner had turned painting in watercolours into an art form in its own right and had even managed to produce genuine masterpieces. Since then watercolours have become an established part of the history of painting. Artists love them because of their radiance and their spontaneity. It is such a pleasure when the painter plays with the light of the paper and the brightness of fleeting, intense pigments as they glisten, come together and swirl around under his brush producing a whole host of different effects. These watercolours are made in France using traditional methods. L'Aquarelle Sennelier has been produced in the same way for more than a century using the best pigments and top quality Kordofan Gum Arabic as a bonding agent. 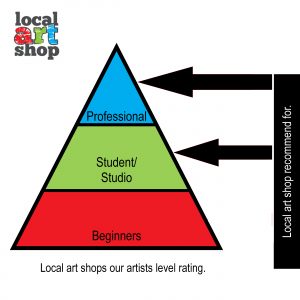 Artists watercolour set
After trying these artists quality watercolours I can see why they cost more than the standard. The colour jumps out of the page and you need less paint. Worth every penny. Review by simon / (Posted on 16/05/2017)

Use spaces to separate tags. Use single quotes (') for phrases.